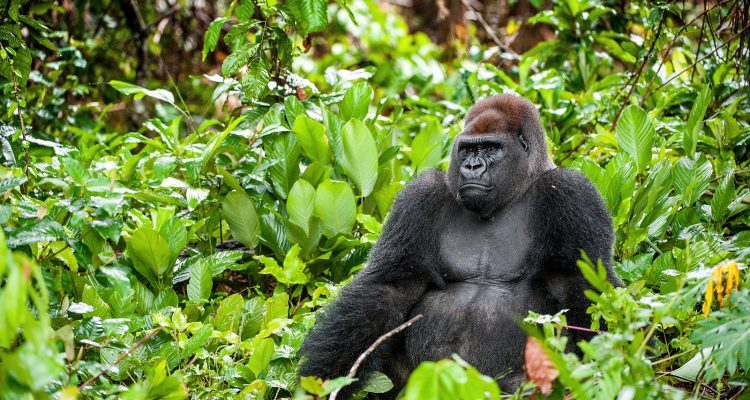 No Monkeying Around: Amazing Facts about Mountain Gorillas

How much do you know about this critically endangered species and National Geographer Explorer Dian Fossey, the woman who dedicated her life to them?

It’s been more than 50 years since legendary primatologist Dian Fossey first encountered gorillas in the mist of the Virunga Mountains. Her legacy lives on at the Karisoke Research Centre in Volcanoes National Park, where researchers are actively working to conserve the species. Check out some interesting facts about mountain gorillas below.

Such great heights: Mountain gorillas roam the steep mountain forests of four national parks across Uganda, Rwanda, and Democratic Republic of the Congo, at elevations in the range of around 8,000 to 13,000 feet—about the same altitude from which a skydiver jumps out of a plane.

Eat your greens: The largest of all the great apes, gorillas can be up to six feet tall and weigh more than 400 pounds, with an arm span of eight feet. They achieve this impressive stature on a mostly vegetarian diet of roots, shoots, fruit, wild celery, and tree bark and pulp foraged in the thick forests of their habitat. Their massive jaw muscles help them chew tough vegetation.

The birth of a movement: Dian Fossey’s first camp was a pair of makeshift tents in Rwanda that she christened the Karisoke Research Centre—a name derived from the pair of peaks on either side, Volcan Karisimbi and Volcan Visoke. A census conducted shortly after Fossey’s arrival in 1967 found only 240 gorillas left at the park.

Mountain woman: Fossey—who locals called Nyiramacibiri, “the woman who lives alone on the mountain”—was the first person ever recorded to habituate gorillas. She spent the best part of 18 years living with and observing these unique primates, who share 98 per cent of their DNA with humans.

They say imitation is the highest form of flattery: In her 1970 cover story in National Geographic magazine, Fossey wrote that she wasn’t satisfied with the textbook approach to animal studies, which instructed to observe from a distance. “I felt that the gorillas would be doubly suspicious of any alien object that only sat and stared,” she wrote. Instead, she “tried to elicit their confidence and curiosity by acting like a gorilla,” in her words—imitating their feeding and grooming and, ultimately, their vocalizations. She pretended to chew on wild celery and even thumped her chest—a symbol of power and strength in the gorilla world.

From experimentation to conservation: Fossey arrived with the intent to simply study gorilla behaviour and their habitat, but she soon became a fierce advocate and protector of the animal as well. She predicted that the critically endangered species would go extinct within the next two or three decades—less than a century after the mountain gorilla’s discovery in 1902.

In defence of wildlife: The Dian Fossey Gorilla Fund, which runs Karisoke Research Centre, puts more than 70 dedicated gorilla trackers in the field to monitor and protect mountain gorillas in Rwanda as well as Grauer’s gorillas in eastern Democratic Republic of the Congo.

Monkeying around: In addition to facial expressions, gorillas’ emotions are communicated through body language and vocalization. Like rambunctious kids, young gorillas play tag and even do somersaults. And gorillas consider staring a sign of hostility.

Geriatric pregnancy: Fossey died more than 30 years ago, but one gorilla that she knew and studied still remains: Poppy, a 42-year-old female gorilla who surprised researchers by giving birth last year, making her the oldest gorilla on record to give birth.

On National Geographic safaris in Rwanda, observe endangered mountain gorillas in their natural habitat and get an in-depth look at the enduring legacy of Dian Fossey during a visit to the Karisoke Research Centre in Volcanoes National Park.

The Great Apes of Uganda and Rwanda 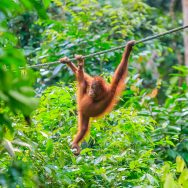