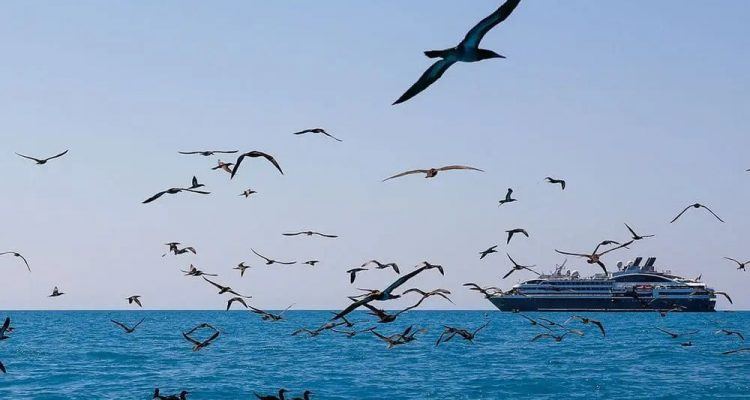 The Lacepede Islands, also simply referred as the Lacepedes, are a group of four islands lying off the Kimberley coast of Western Australia, separated by the Lacepede Channel, and located about 120 km (75 miles) north of Broome. The islands form a long chain that stretches 12 km (7.5 miles) and are small, low sandspits formed from coarse sand and coral fragments, with only scattered low vegetation, which lie atop a platform coral reef.

How the Lacepede Islands got their name

The Lacepedes were named by Nicolas Baudin, a French explorer, cartographer, naturalist and hydrographer, on 5 August 1801 during his New Holland (Australia) expedition, in honour of French naturalist Bernard Germain de Lacépède, who described several Australian fish species. The name of the islands was first charted on the Freycinet Map of 1811, the first published map of Australia showing its full outline, and of which preceded, by three years, Matthew Flinders’ map of Australia, Terra Australis or Australia. The islands themselves were named Napoleon, Grant and Victoria Islands however they are now known as West Island, Middle Island, Sandy Island and East Island.

An important breeding site for bird and marine life

In 1970, the islands became an A-class Nature Reserve in recognition of their significance as a breeding site for bird and marine life, and since the eradication of rats in 1986, this has only further increased their popularity as a nesting site for seabirds, ultimately resulting in them being identified as an Important Bird Area (IBA) by BirdLife International.

The islands support over 1% of the world populations of Brown Boobies and Roseate Terns. The breeding colony of Brown Boobies is possibly the largest in the world, with up to 18,000 breeding pairs, while 20,000 Roseate Terns have also been recorded on the islands. Other birds breeding on the islands include Masked Boobies, Australian Pelicans, Bridled, Crested and Lesser Crested Terns, Eastern Reef Egrets, Silver Gulls, Common Noddies, Lesser Frigatebirds, and Pied and Sooty Oystercatchers. Visiting wading birds also include Grey-tailed Tattlers, Whimbrels, Bar-Tailed Godwits, Ruddy Turnstones and Great Knots.

In addition to birds the Lacepedes are also the most significant breeding site in Western Australia for the nationally vulnerable Green Turtle. Humpback whales are also sighted frequently in the area during their northern migration in the winter and early spring. The West-Australian population of humpback whales has recovered from its whaling past, with an estimated 40,000 whales migrating the coastline each year.

The best way to explore the Lacepede Islands, and spot its prolific bird and marine life, is from the water on a Zodiac® tour as part of a Kimberley cruise. So, if you are a keen birder, or “twitcher”, or just a nature lover, then the Lacepede Islands in the beautiful Kimberley should be on your travel list.