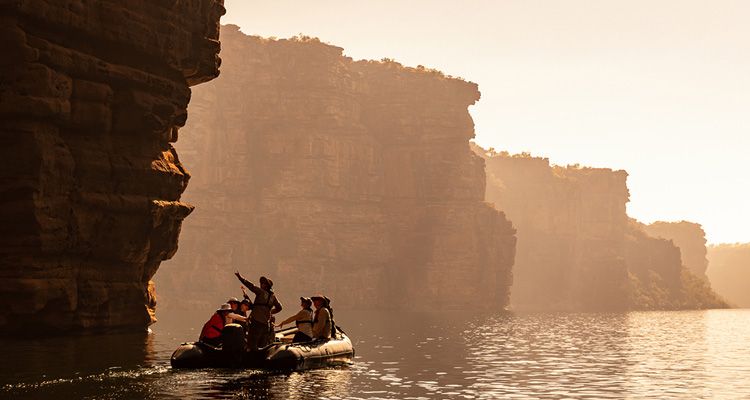 Discover a region as fascinating as it is unknown

Located in North-West Australia, the incredible Kimberley region is a hidden treasure just waiting to be uncovered, with abundant flora and fauna, fascinating aboriginal history and culture and canyons as far as the eye can see. Read on to discover more about this incredible untouched wilderness and some of the highlights which you can discover on our Australia’s Iconic Kimberley expedition cruise.

One of the world’s last wilderness frontiers

Three times larger than England and home to less than 40,000 people, the spectacular Kimberley is one of the world’s most remarkable wilderness areas and  most sparsely populated regions on earth. With over 7,000 miles of coastline and including some 2,500 islands, the Kimberley is far better accessed from the sea than overland, as it is actually quite difficult to access by road.

The Kimberley is home to a host of remarkable creatures, from birds and mammals to marine life and reptiles. The Lacepede Islands is THE place to discover for bird watching as it is an important breeding area for sea birds. The breeding colony of Brown Boobies is possibly the largest in the world, with up to 18,000 pairs, while 20,000 Roseate Terns have also been recorded. It is also a very important breeding habitat for the green turtle. While a slightly larger resident of the Kimberley region is the iconic saltwater crocodile. The largest living reptile in the world, that can grow up to 6m in length, these apex predators love the abundant mangrove forests and mud banks along the Hunter River, where they can often be spotted in the water and basking at the river’s edge. They are known to be aggressive and very territorial, so best appreciated from the safety of a Zodiac with an experienced guide!

The Kimberley is rich in cultural heritage too and the region has great significance for Australia’s Aboriginal people. Spectacular paintings in the Wandjina and Gwion Gwion styles can be discovered in the region’s many caves and grottos. These amazing rock art galleries, which may date back to over 30,000 years before our time were created by the first wave of seagoing colonisers of the Australian continent. The oldest detailed depiction of human figures in the world, this rock art attests to the rich past of this land and the great significance to spirituality and sacred images.

The Bonaparte Archipelago, is a rugged maze of islands that stretch almost 150 km along the remote Kimberley coast of Western Australia, breath-taking in colour and scale. The remoteness of their location means it is a truly  unspoilt and remarkably pristine place to explore and experience. Phillip Parker King named “Swift’s bay” after Jonathan Swift (1667-1745) the author of Gulliver’s travels. The ‘T’ shaped bay is composed of heavily fractured sandstone providing an abundance of rock shelters, rich in more examples of both Wandjina and Gwion Gwion style rock art

Jar Island is particularly rich in ancient rock art in the Gwion Gwion style which is unique to the Kimberley region. Mainly neglected by, or unknown to, the early European researchers of Aboriginal culture in the Kimberley in favour of the dominant and more dramatic Wandjina art, Gwion Gwion art has in recent years gained world prominence.

Out of this world waterfalls

The Kimberley region is awash with spectacular waterfalls, and not just the traditional type of waterfalls you would expect to see!

The world’s only Horizontal Falls is found in Talbot Bay and is a true natural phenomenon. Here the ocean’s 10m tidal fall sucks huge volumes of water through a break in the McLarty Ranges. Seawater builds up faster on one side and is forced through the chasms in the red rock, creating a rushing waterfall effect. It has been described by Sir David Attenborough as “One of the greatest wonders of the natural world.” The falls occur twice a day and with each change of the tide, the direction of the falls reverses, creating epic tidal whirlpools.

This incredible tidal movement is also the reason for another ‘unusual waterwall’, the Montgomery Reef. While not technically a waterfall, the reefs distinctive feature is it’s invisible at high tide as it’s covered by more than five metres of water! At low tide, the reef emerges, and the water begins to flow, creating turbulent rivers and mini waterwalls, overall creating one of the longest waterfalls in the world!  It has to be seen to be believed.

A journey up the King George River is nothing short of breathtaking, with the 80-metre-high sides of the gorge display varying degrees of weathering of the ancient Warton sandstone. The colours and textures of the gorge change with the light as you travel further up the river creating a continual changing scenery that is simply stunning. The journey culminates at the amazing King George twin falls; the highest single-drop falls in the whole of the Kimberley. The river is also of high cultural significance to the Balanggarra people, for whom the falls are the male and female Wunkurr (Rainbow Serpents)!

And we can’t not mention Mitchell Falls – made up of multiple waterfalls and plunge pools, it is another stunning sight. These multi-tiered falls are quite remote and best seen by air and you have the opportunity to take a helicopter ride to see them in all their glory.

If this has whetted your appetite to discover this iconic region for yourself, we have two expedition cruises departing this September. For full itinerary details click here.