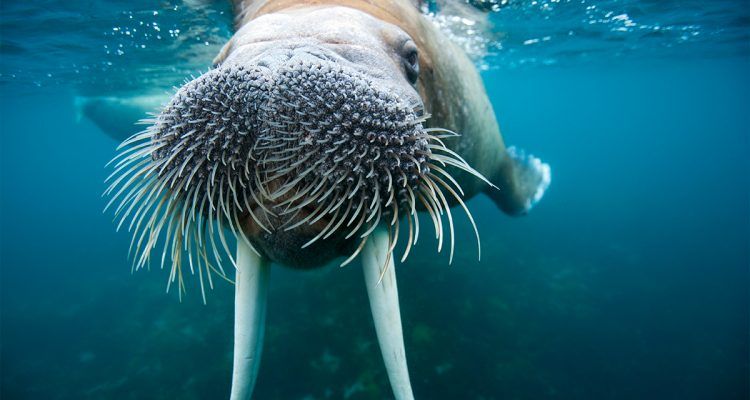 A breathtaking region of seasonal sea ice and scattered archipelagos, the Arctic is home to some of the world’s most spectacular and sought-after wildlife. But it’s not all about polar bears, Arctic foxes and reindeer (or caribou).

The bruising, blubber-covered walrus, with its fascinating nature and unique behaviour, is also a must-see for most visitors.

10 Fascinating Facts About the Walrus:

1. It’s thought that the walrus gets its name from the old Norse word hrossvalr, meaning horse-whale, which subsequently passed into old Dutch and German languages as walros. It is, of course, neither a horse nor a whale, but a member of the pinniped family, related to seals and sea lions.

2. There are two separate walrus subspecies—the Atlantic and the Pacific—and they never mix. Pacific walruses are mainly found in the seas separating Alaska and the Russian Far East, while Atlantic walruses live off the Eastern Seaboard of North America, around Greenland and on archipelagos such as Svalbard and Franz Josef Land in the Arctic Ocean.

3. The walrus’ Latin or scientific name, odobenus rosmarus, means tooth-walking sea horse, on account of its habit of pulling itself out of the water onto sea ice using its prominent tusks. These tusks are outsized teeth (like an elephant’s tusks) and can grow to a length of 3ft.

4. Walruses primarily survive on shellfish and adults can eat between 3,000 and 6,000 clams in a single session. They feed by moving along the seabed at a maximum depth of about 260ft, using their 400 to 700 whiskers (or vibrissae) to feel for and detect their prey, which also includes other marine invertebrates.

5. One walrus fitted with a satellite tag spent more than 40 hours diving during a 74-hour period. It made more than 400 dives, each lasting from five to seven minutes, and consumed an average of 125 lbs. of food every day—roughly 5% of its body mass.

6. Some large male walruses occasionally prey on other pinnipeds such as ringed and bearded seals, as well as seabirds and even narwhals.

7. Atlantic walruses are right-handed! One of their favoured foraging techniques is to use one of their flippers to beat sediment away to find prey beneath it. In 2003, scuba-diving researchers in Greenland found that 89% of the time, they used their right flipper rather than their left.

8. The largest Pacific walruses can weigh up to 1.8 tons (or 4,000lb), more than double the largest polar bear on record. But they’re not the heaviest pinnipeds—a male southern elephant seal can weigh over 3.5 tons (or 7,000lb).

9. Walruses live long and can reach an age of up to 40 years. Males don’t become sexually active until they’re about 10 years old and can’t compete with bigger males until they’re 15. Females reach sexual maturity at around eight years and can have a calf about once every two years.

10. Walruses have only two known predators besides humans: orcas (killer whales) and polar bears. There have been Inuit accounts dating back to the late 1700s of polar bears killing walruses using stones or large pieces of ice. An Inuit stone sculpture displayed in the Itsanitaq Museum in Churchill, Canada, depicts a polar bear lifting a block of ice above the head of a sleeping walrus.

Discover and explore the Arctic, the realm of the magnificent walrus, with National Geographic Expeditions.

Cruise pristine polar waters in search of these unique and charismatic marine mammals. From our purpose-built expedition vessels, you’re likely to see them spread out onshore or on ice floes, while small boat excursions, led by our expedition team, will allow you to get up close and personal. All our cruises are accompanied by a National Geographic expert and photographer.

Travel with us and gain greater knowledge of the walrus—and other Arctic animals—and capture lifelong memories of their spectacular environment.